Caravanning with your Cat – Full time!

How many people caravan with their cat?  You see lots of families travelling and caravanning with their dogs, but very few witht their loved feline companion.  When we saw a photo of “Missy” and found out that she was on the road full time with her ‘parents’, we had to ask her mum Tracey what it was like to Caravan with your Cat!

First Question: I guess we asked ourselves repeatedly –  can it be done? We thought no we are pet free, it leaves our options unhindered, great we’re decided, no more pets, maybe house sitting to get our pet fix.

Well that changed when we saw a picture of Missy, or Gypsy Rose as she was known then. Her Breeder Emma from Ridgeview Cattery on the Gold Coast was a page I followed, her facebook page has been one of my favourites for a long time. I was a British Shorthair breeder myself many years ago and Emma’s cattery was run on the same strict values and ethics I had during my breeding time, so I couldn’t help but follow her page, despite agreeing we would not get another pet, as it turns out, Gypsy Rose has my own prefix in her pedigree, how coincidental. 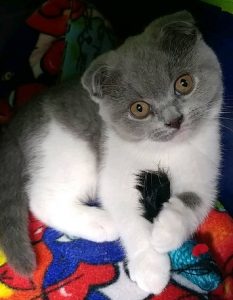 Gypsy Rose came to us at 12 weeks of age from her breeder and moved straight into the caravan with us, it was initially trial and error with how we set things up for her including where to put her litter but eventually we got it all sorted. Then came the Harness training and getting used to the fact that the awning area is as far as she can go, without her lead on. Considering this is the only home she has known since leaving her breeder, it is a lot easier to train a cat to become a nomad, but it still wasn’t without issues, Gypsy became Missy after a while as it suited her better. 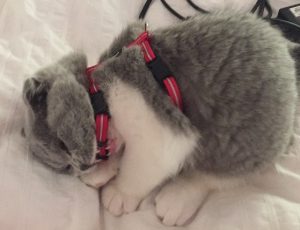 Birds didn’t take well to her being in the awning area and bomb dived her regularly, haha which drove her crazy, you have to watch the bugs and wildlife that enter her zone and remove either her or the visitor quickly, after all, its all about being a responsible owner. There were also a few times she disappeared into cupboards and we couldn’t find her, heart failure!! But these are all things you learn to keep a better eye on.

Missy’s litter is kept under the table and is cleaned out as soon as she uses it, much the same as we did when we were house dwellers in the past, I have a water fountain to keep water fresh and aerated while we are plugged into power, but of course the normal bowl when we are free camping, we also only use either boiled (and cooled down in the fridge) or bottled water for her to ensure there are no tummy upsets (and what follows it) as we move from place to place. 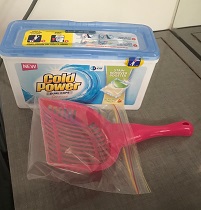 When we are actually travelling we are lucky enough to have the dual cab 4wd and the entire back seat is Missy’s, we have a fold up dog crate, beside that is a big folded up cloth sleeping back that she sits on to watch out the window, her litter sits behind my seat on the floor and she has her water bowl accessible to her as well. Since we have done this, she has been an excellent traveller, when she was stuck in her crate, she just howled all the time, we worked out she just wanted to be able to access us, if she so wished. 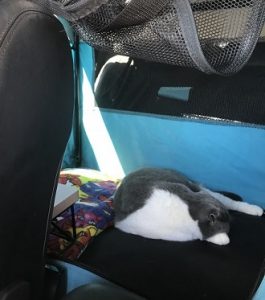 When in camp, she has educated herself really, if her fence isn’t up, she will not go past the step of the caravan, she just sits there and watches the world go by, if something scares her, she just runs back inside.

Her fenced up area covers the entire awning area and we just step over it. When she was a kitten she never went outside without her harness on, but she soon learnt not to bother trying to jump over the fence and she just sits around under the shade and appoints herself the security guard of the area, she even growls at night if there is someone outside haha well she only developed this during our 5 month stint in Yulara so will see if it happens elsewhere, but she is certainly great at letting us know if something is around outside. 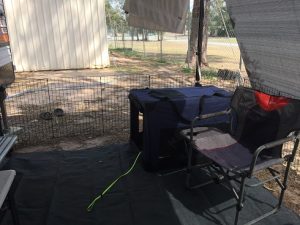 We have been here in Yulara working since October and although having a cat here is frowned upon and not really allowed (there is a huge feral cat problem out here) because we are staying in our own caravan in the tourist park and not staying in provided staff accommodation, they have pretended she is not here 😊 so there are always options if you have a pet.

There has been jobs we liked the look of but because they don’t want pets, either dog or cat, we are not eligible for it, so we look for other roles. There is heaps of work around so having a cat does not restrict us we think. We are heading off for a new role up towards Katherine in a week or two for another 5 or so months, so Missy will get to experience a new area.

Having a cat is a huge responsibility and you must be committed to doing the right thing by not only your cat but the environment you are in. When it’s been really hot here, air con has been used constantly, but then those who don’t have a pet do exactly the same thing, it’s the nature of the area we are in. We have 2 Sirocco fans that are on constantly and a cool mat straight out of the freezer for those extreme heat days.

Overall, the benefits far outway the restrictions, the joy our little munchin brings to us is something we would rather not be without and the silly faces, the weird positions she puts herself in to fall asleep and the greeting we get after a long day makes everything all worthwhile. 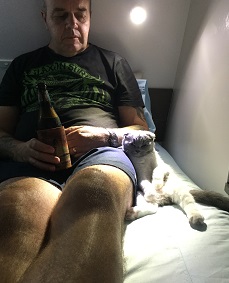 Thank you so much Tracey – a wonderful story of life on the road with Missy – possibly the cutest cat we have ever seen!!!

This site uses Akismet to reduce spam. Learn how your comment data is processed. 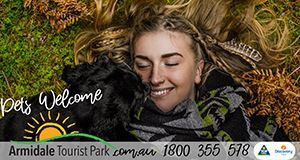 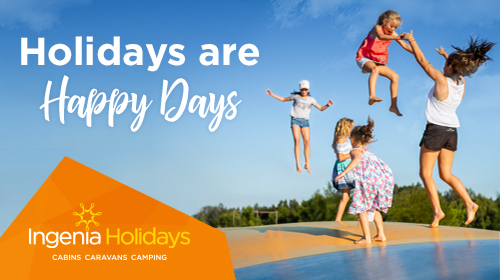 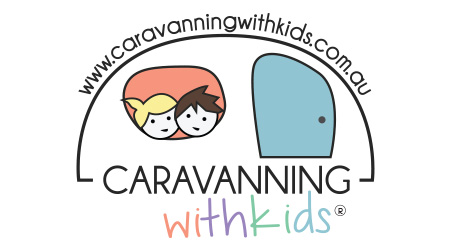 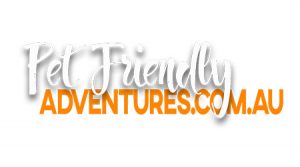